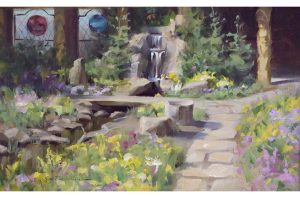 When Father W. Thomas Faucher arrived in 1996, he spear headed not only an addition to St. Edward the Martyr Catholic Church, he also oversaw the addition of St. Winefride’s Garden, which is adjacent to the church.  The concept was to have a garden space for prayer, refreshing the soul as one encounters the beauty of God’s creation.    The original shrine of St. Winefride in Holywell. Wales, inspired the design of the garden.

According to legend, Winefride, also called Gwenfrewi and Guinevra, was the daughter of a wealthy resident of Tegeingl, in Flintshire along the north coast of Wales in the Middle Ages.  She was abducted from her hut by Caradog of Hawarden.  As her captor dragged her down the hill, she struggled; he eventually gave up and cut off her head.  Her uncle, Bishop Beuno, heard the cries and came running.  He put the head back on the body and she came back to life.  Where the head had fallen there appeared a spring of water which became Holywell, one of the most popular pilgrimage sites in Wales.  She went on to become a nun and then Abbess at a convent of a double monastery.  She died there fifteen years after her miraculous restoration to life.

Professional assistance was sought from architects and designers, especially John Kvapil, Phil Doza, and Chris Hart Henderson.  The outside walls of the garden were carefully designed to provide privacy on the west with a solid wall and yet let in as much winter light as possible on the south with pillars and open fences between them.  Sisters’ own J. Chester “Skip” Armstrong carved the 37 statues supporting the roof, each representing the patron saint of the parishes of the Diocese of Baker.  Eventually the final ideas of grills with stained glass medallions finally came into focus.  When it was realized the plans called for 14 of these, counting the gates, it seemed divine inspiration to use them to honor the 14 Stations of the Risen Christ.  The designs for these were done by Barbara Walter and built by David Schlicker.  Jeff Wester designed and built the grills.  Both volunteers and professionals have devoted countless hours to the building of the garden.

The garden itself includes plants from the Sister’s area ecosystems.  The sub alpine ecosystem is represented by mountain hemlock and vine maple; the Three Sisters Wilderness is represented by kinnikinnick, bear grass, and other plants; the riparian ecosystem is represented with Lewis monkey flower and sea thrift; the lowland meadow ecosystem is represented by Ponderosa pine and aspen.  In addition, there are numerous flowers and bulbs to bring color year round.  The focal point is water gushing from natural boulders.  At the dedication of the Garden, water from the shrine at Holywell was mixed in this water feature.  The garden has a paver walkway which meanders away from the wall and bridges a stream.   In the center of the garden, a copper structure represents the burning bush mentioned in the book of Exodus.  This is a shrine dedicated to those who died on September 11, 2001 in the terrorist attack.

The parish of St. Edward the Martyr uses the garden as a place for quiet meditation, a journey of wonder of the beauty of God’s creation, and a meeting place.   It serves as a natural processional aisle for Palm Sunday and the Easter Vigil.  It seems only natural, too, that in St. Winefride’s garden is an Urn Garden, where loved ones are laid to rest, visible from the glass wall of the church, allowing communal prayer from the departed, the present, and those who are to come.

Take a tour of the Stations of the Resurrection

See a map of the statues in St Edward Church